Virtual reality (VR) has been technologically possible for decades, but it has not seen wide scale commercial viability until recently. Currently, the modern tech industry is in a period of rapid innovation and growth regarding VR technology and application. Because of its hands on and easily understood design, VR has made its way into video games, classrooms, and the workplace.1 VR uses the brain’s natural perception of depth to transport you to another world. You use the same motions and visuals that you have had since birth to look and interact with virtual environments. People who are unfamiliar with this technology can intuitively interact in virtual environments with ease.

Our research team has set out to address the problem of inaccessibility in VR applications by adapting their content for screens. The challenge was to display how a person acts and interacts in the virtual world in a naturalistic, aesthetic, and practical way. To adapt the content, we built a “mixed reality” system, which composites a live actor into a virtual environment. This creates a final image which is similar to a live action camera shot of an actor, yet the environment is completely virtual (Figure 1).

Our team filmed a live actor in front of a green screen. Then, we attached a positional tracker to the real camera, and created a virtual camera to mirror the position, rotation, and field of view. The actor is then composited into the shot in the position they would be occupying. Because the virtual camera tracks in the same way as the real camera, the virtual scene acts similarly to a real environment. This yields a final shot which seamlessly places the actor in the virtual world. 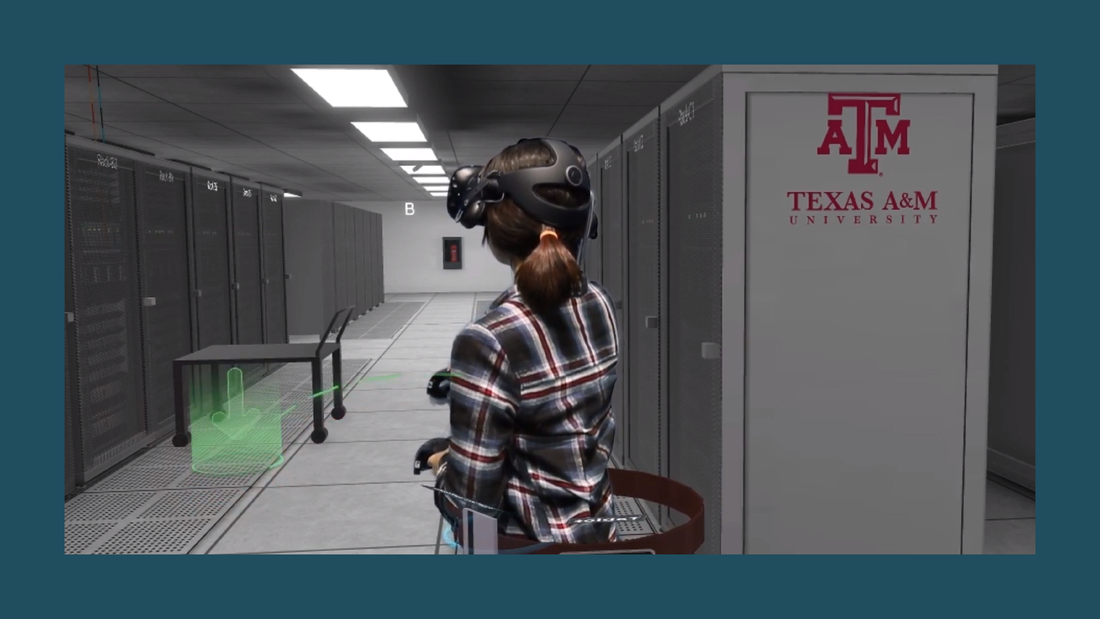 We defined three guiding criteria for the success of our research:

To make the experience seem naturalistic, objects would have to interact with the actor as they would in the real world. Therefore, we would have to include variable opacity in our composition. If an object appears between the camera and the actor, it must block the subject from view in the same way it would naturally. If the object has translucency, then it should only partially cover the subject. We achieved this through the four panel compositing method, developed by Kert Gartner and the Owlchemy Lab team for the production of VR game trailers.3

IN STANDARD VR, THESE WOULD ALL BE SINGULAR EXPERIENCES, BUT WITH MIXED REALITY, ENTIRE GROUPS CAN INTERFACE WITH THE PROGRAMS

I would like to thank Texas A&M University and the Department of Visualization for sponsoring our research. Assistant Department Head and Laboratory Director Bill Jenks, as well as Soft Interaction Research Director Dr. Hwaryoung Seo, have helped us immeasurably. I would also like to thank my graduate student collaborators, Eunsun “Sunny” Chu, Anantha Natarajan, and Austin Payne, as well as the other branches of Soft Interaction responsible for Cyber Security VR, and Creative Anatomy VR. Methodologically, I would like to thank Kert Gartner, LIV Development Team, and Owlchemy Labs for their extensive documentation of mixed reality content creation and development. Lastly, I want to thank the amazing teams behind the programs we used. These programs include LIV Compositor, OBS Virtual Camera, Black Magic Media Express, Adobe After Effects, and Owlchemy Labs “Job Simulator.”