TB’s rapidly evolving strains present a particularly formidable problem. Many strains become drug resistant and even multidrug resistant (MDR), a problem worsened by patients carrying out their treatment regimen incorrectly.2 The worldwide strategy to combat this disease is multifaceted; efforts include increasing healthcare access and education in areas affected by TB, developing more accurate diagnostic methods, and improving drug research for more powerful treatments. Globally, the TB incidence rate is falling by 2% each year. However, this rate needs to increase in order to meet the goals of the World Health Organization’s End TB Strategy.

Expedited drug development methods are necessary to adequately address TB, particularly MDR-TB.3 Treating these strains increases the complexity of the treatment, adding time and cost. An average treatment could last at least 20 months. Our project aims to establish a faster and more cost-effective drug development process. Drug development typically requires longitudinal animal studies to assess effectiveness. These studies involve monitoring a new TB drug in animal subjects; they require many animals in order to sacrifice a few animals and analyze TB progression at multiple time points throughout the study. The Maitland lab proposes utilizing an optical detection method to simplify these studies and to require fewer animal subjects. This method would be more statistically relevant because the same animal could be measured at multiple points in time, resulting in studies with more scientific rigor. Additionally, a more sensitive analysis method could detect changes in the amount of TB sooner, providing quicker feedback about the likelihood of success for a treatment candidate.

The optical detection of TB would employ a technology called reporter enzyme fluorescence.4 Reporter enzyme fluorescence uses a molecule that is cleaved only when it contacts a specific bacterial enzyme in Mycobacterium tuberculosis. After the fluorescent portion of the molecule is freed from the quenching portion, the molecule can be excited by light. Excitation causes the molecule to emit light at a wavelength longer than that of excitation. This light can be detected, and the amount of signal corresponds to the number of bacteria. This method provides a faster alternative to the current standard of analyzing the growth of bacteria on an agar plate; optical detection can deliver results in a matter of hours whereas culture takes 6 to 8 weeks.

Our system design is tailored to monitor TB in a mouse model, because mice are commonly used to assess potential drugs. We are utilizing both computer simulations of light transport and physical models of mouse lungs in order to optimize the system setup and further enhance its performance.

The specific scope of this project is to investigate how mouse lungs can be accurately modeled by an optical tissue phantom. Essentially, an optical tissue phantom is a plastic model that interacts with light in the same way as the biological tissue—sharing both similar shape and optical properties. Phantoms are commonly used to evaluate and calibrate imaging systems. Most are made of one or two materials with rather simplistic geometry. Adding complexity by replicating complicated anatomy, adding texture, or using more materials can mimic tissue with greater accuracy. Our phantom will both validate the computer simulation and test potential system configurations without requiring further animal studies.

MICROBUBBLES WERE USED TO REPRESENT DIFFERENT POINTS THROUGHOUT THE RESPIRATORY CYCLE

The confocal microscope images validated that the intended volume percentages for each thick phantom was achieved (Figure 4) by comparing the area inside the bubbles to the entire field of view.

For each thin phantom, the scattering coefficient was consistent across the spectrum of visible light, so it could be approximated as a constant value for each volume percentage (Figure 5). The scattering showed a linear relationship to the volume of air bubbles (Figure 6). This trend corresponded to, and thus, validated the light transport computer simulation.7 Additionally, these phantoms successfully represented different points throughout the respiratory cycle. 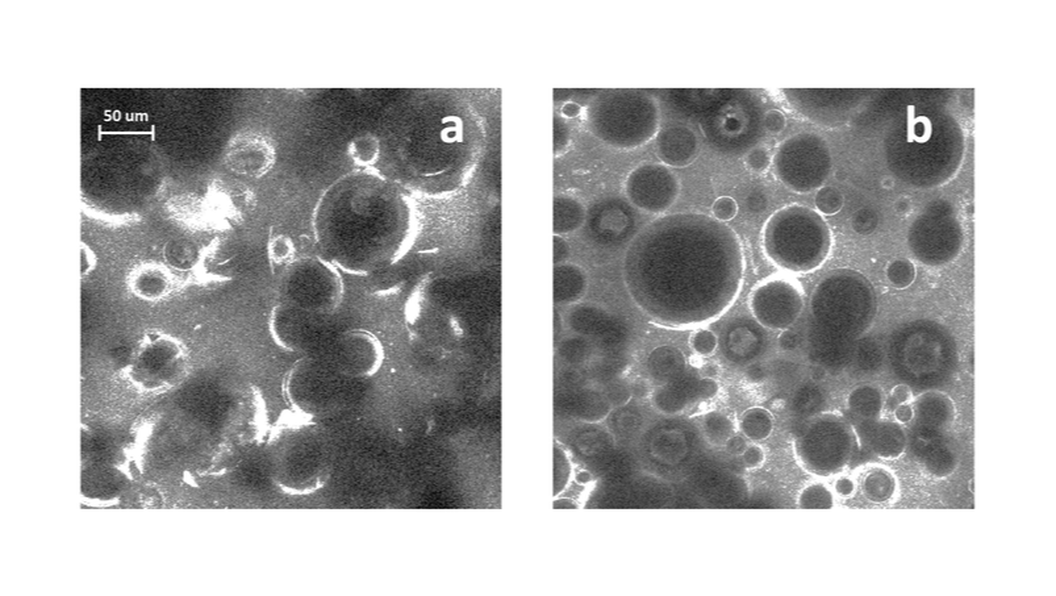 This work was supported by the National Institute of Allergy and Infectious Diseases and the National Science Foundation. I would like to Dr. Maitland and Dr. Durkee for their mentorship and guidance throughout the project.